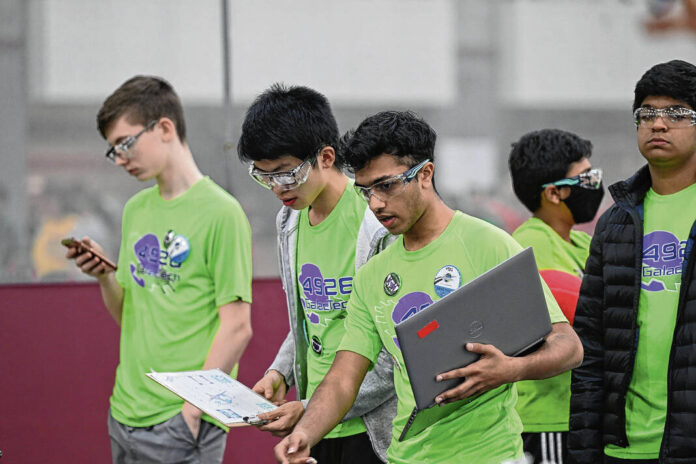 Just a few months after competing in an international championship, a local robotics team is back at work preparing for another competition—not only as a competitor, but also as a host.

Team 4926 or “GalacTech” will be hosting the 2022 Indiana Robotics Invitational (IRI) on July 16-17 at Columbus East High School. There is no entry fee for spectators, and teams from across North America have been invited to enter the competition, said Sam Geckler, president of Columbus Robotics and founder of Team 4926.

The event follows an eventful season. In April, GalacTech was part of the winning alliance at the Indiana State Championship For Inspiration and Recognition of Science and Technology (FIRST). The team then competed at the FIRST International Championship in Houston, making the division playoffs but not the final tournament. More than 450 high school teams from around the world competed in the 2022 FIRST Robotics Competition (FRC) Championships, including groups from near Indianapolis and as far away as Israel.

Team 4926 also had their first-ever home game in March, with Columbus East hosting the first FRC event ever hosted in Columbus.

“It’s been a wild year, that’s for sure,” Geckler said.

While the March event was part of the official season for FIRST, the Indiana Robotics Invitational is an off-season event. According to Geckler, the event has been held for more than 20 years. Teams first apply to compete, and then a certain number are invited to compete.

The invitation was usually held at Lawrence Township schools. However, both Lawrence North and Lawrence Central High School are having some construction going on and will not be able to host this year.

“The organizing committee was down this year for the district event we had here and played at Columbus East,” Geckler said. “…They liked the venue so they asked us to host IRI, which was never in our plans. And the Organizing Committee and all of Team 4926 were pretty exhausted after the World Championship run, but it was an opportunity we really couldn’t pass up.”

The teams arrive on Friday 15th July with the games taking place on Saturday and Sunday. Geckler said they’re not sure which teams are coming at the moment, but 56 have been invited. This includes teams from across the United States and some from Canada and Mexico.

However, the invited teams do not always choose to participate due to travel expenses and shipping of the robotics equipment.

“In the past, teams from Israel and New Zealand have traveled to play at IRI, but unfortunately I don’t think the current economic climate is good for travel,” said Geckler.

He noted that the event was somewhat “unusual.” The competition will feature the usual setup for FIRST events – qualifiers, followed by alliance selections and playoffs – and will leverage the organization’s 2022 game, Rapid React.

However, IRI is also a charity event. Organizers will select a charity that will receive contributions from the event, including proceeds from a silent auction and a portion of entry fees paid by teams. There may also be a talent show.

The charity named is usually related to current events, Geckler said. In 2019, the event raised funds for Team 4418, or “Impulse,” of Highlands Ranch, Colorado, following a school shooting at the STEM School Highlands Ranch in May of that year.

“The person killed during the recent school shooting was one of us, Kendrick Castillo, a senior with FIRST Robotics Competition Team 4418, STEM IMPULSE from Colorado, USA,” FIRST officials said in a blog post just days after the tragedy . “He was in his senior week of high school and was planning to go to college to study engineering. Reports have surfaced that Kendrick brought down the shooter, likely preventing further deaths. He is rightly celebrated as a hero.”

The 2019 Indiana Robotics Invitational raised funds to help Team 4418 pay its entry fee for the upcoming FIRST season and to contribute to a victim support and memorial fund established by FIRST.

“I wouldn’t be surprised if something goes to Texas this year, but I can’t confirm that,” Geckler said.

Discussing the invitation, he said that the schedule for preparing the event is tight. Team 4926 had a year to plan for March’s district event, but the Invitational comes just months after the FIRST championship.

“We now have the largest student body since our inception,” he added. “We are almost overwhelmed. On summer nights I can bring 30 kids to the store – 30 high school kids trying to build robots. … We will be inundated. We’re trying to recruit new mentors to come and help these kids do the things they want to do.”

For example, the students designed a major modification to their robot – the same one that won the state championship – to increase its capacity, so the team is now building a second robot just for the invitational tournament. He admitted he wasn’t sure if they could finish it in time.

Still, anticipation is in the air as the Invitational approaches.

“This is a rare opportunity to see some of the best teams in the world – I know for sure because we played with some of them down in Texas,” said Geckler. “Some crazy robots will appear here. So we are excited.”