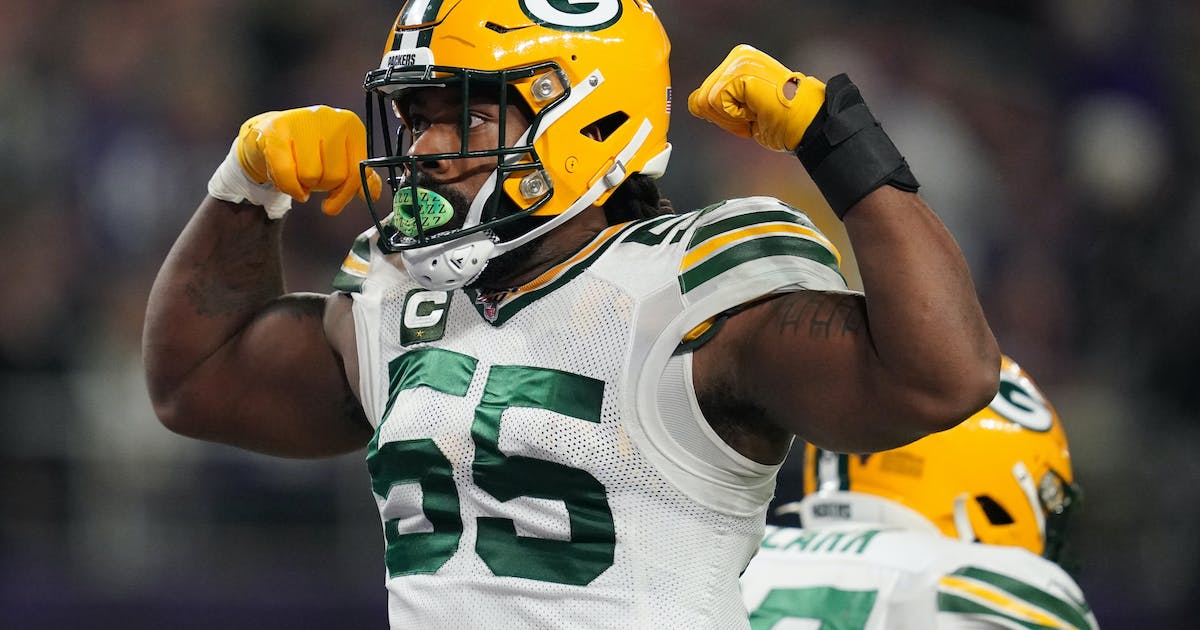 A former Packers pass rusher visited the Vikings on Monday.

Za’Darius Smith, who was fired from Green Bay last week for financial reasons, continues his free-agent tour with a stop at the TCO Performance Center. Smith documented the trip on his Instagram Story and showed the Vikings rolling out the purple carpet with a welcome message on the big screen overlooking TCO Stadium at team headquarters. The visit lasted until Monday evening.

Smith, 29, also has interest from the Chiefs and Cowboys, a league source said. He apparently has options after reportedly backing out of a verbal agreement with the Ravens last week, where he began his NFL career as a 2015 fourth-round pick. He was drafted a round after the Vikings selected Danielle Hunter, who Smith could pair with to create a powerful pass rush should the Vikings eventually sign him.

Smith is coming from back surgery in September that limited him to just one game for the Packers last season. He had 26 sacks between the 2019 and 2020 seasons when the Vikings’ new senior defensive assistant Mike Pettine was Green Bay’s defensive coordinator. The Vikings also hired Smith’s former Packers position coach, outside linebacker coach Mike Smith, for the same role in Minnesota. The one-game pass rusher’s career high came against the Vikings when Smith had 3.5 sacks in December 2019 at US Bank Stadium.

If the Vikings can afford him, the defense could use Smith’s talent and experience on the edge of a new 3-4 front under coordinator Ed Donatell. Outside of Hunter, Minnesota has 16 career starts at that position – all by DJ Wonnum at the end of third year. Patrick Jones, Janarius Robinson and Kenny Willekes are also signed.

The Packers fired Smith, a two-time Pro Bowler, last week to save more than $15 million in salary caps. The Vikings would likely have to make room to add a player of Smith’s caliber. One option could be to convert Hunter’s recent roster bonus into a signing bonus to spread caps out into future seasons.

The NFL free agent market has been friendly to veteran edge rushers this month. Five players — Maxx Crosby of the Raiders, Von Miller of the Bills, Harold Landry of the Titans, Chandler Jones of the Raiders and Haason Reddick of the Eagles — agreed on contracts worth at least $15 million per season and for at least $30 million in guarantees. The contract, which Smith resigned from in Baltimore, is said to be worth up to $12.5 million a year.

Smith only played 18 snaps last season. They came during the Packers’ season opener while he was trying to get over a nagging back injury he had while reporting to training camp. He spent some time on the non-soccer injury list during camp and ended up on injured reserve after undergoing surgery.

“It would have been nice to have him out there all the time because our defense was playing at a very high level,” Packers general manager Brian Gutekunst said of Smith at the NFL Scouting Combine this month. “What Za’Darius can bring is certainly something we’ve missed at times, you know? Really proud of Rashan [Gary] and Jonathan Garvin and Preston [Smith] and these guys, the way they bridged the gap. Za’Darius is a really, really good player.”

In other free-agent news, according to a league source, Bill’s offensive lineman Ryan Bates is expected to resume his free-agent tour Tuesday in Chicago. Bates, the 25-year-old guard who started five games for Buffalo last year, visited the Vikings last week and most recently completed a trip to the New England facilities on Monday. He’s a restricted free agent, which means the Bills can match any offer he gets.

Autocam Medical is hosting a job fair in Montcalm County

More Canadians are turning to coupons as grocery prices soar