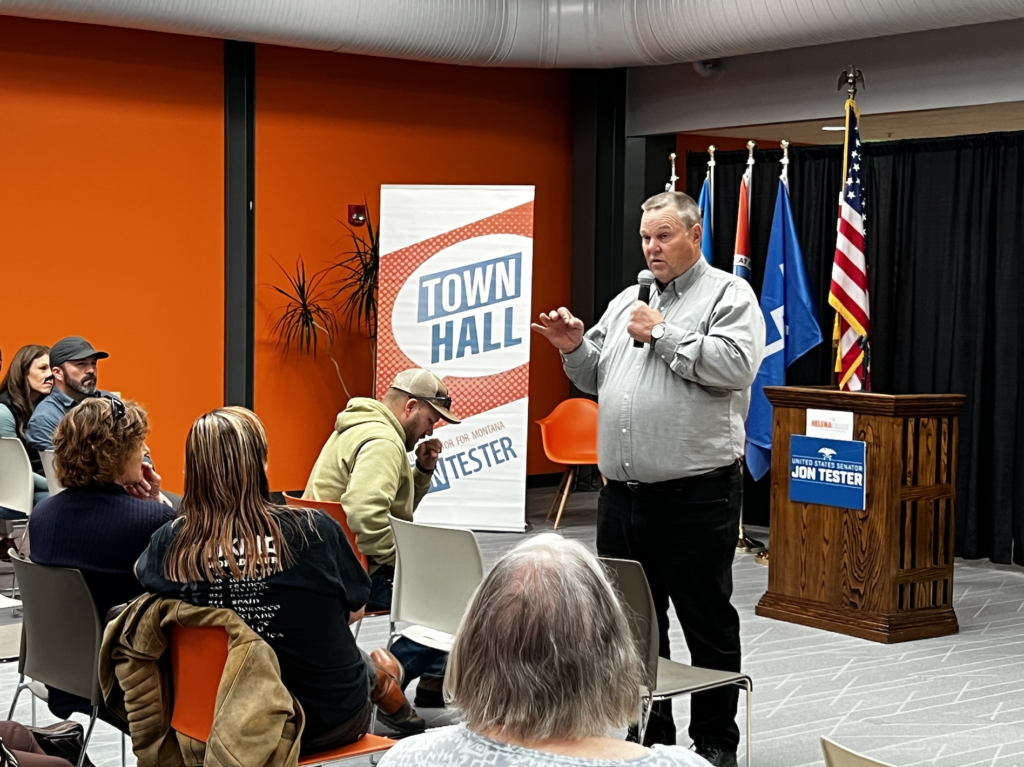 Thirteen-year-old Bode Doud skipped school on Friday to question US Senator Jon Tester on the Organization of the Petroleum Exporting Countries (OPEC) and President Joe Biden reconsidering the nation’s relationship with Saudi Arabia.

The seventh year asked for Tester’s opinion the matter during a town hall in Helena, the senator’s second in-person town hall since the COVID-19 pandemic. Lines of attendees filled the student center at Montana State University’s Helena College.

The senator responded to Doud’s question that OPEC set what he paid for gasoline throughout his adult life. Tester said the way to minimize OPEC is to get as much affordable energy as possible, from petroleum to renewables.

The senator answered 20 questions in a public forum, which criticized Tester’s Republican congressional colleagues for not hosting.

A participant asked about the infrastructure investment and employment law that was signed last November.

“Your fellow senators and lawmakers, especially in the West, who didn’t support it but are now happy to get it, what do you tell them?” asked the participant.

Tester spoke about the long negotiations that took place across the aisle to get the $1.2 trillion invoice passed.

“If we don’t start investing in infrastructure, how do we expect our economy to keep growing?” Tester said. “As for the credit, you know, maybe that’s all they need to be credited for.”

There were several questions about veteran health care since Tester is the chair of the Senate Committee on Veterans Affairs.

One attendee said bureaucracy stands in the way of veterans receiving physical therapy and audiology as expansion efforts to locations across the state have been hampered, he said, by the suspension of room rentals.

Tester said that Dr. Shereef Elnahal would visit the area in November and that this would be a topic for discussion.

“These people have served this country and should receive physical therapy and hearing skills as part of the deal,” Tester said.

Another question for the Senator related to the crisis in Montana’s long-term care facilities and what Tester could do to help.

“Reimbursement rates for Medicaid do not appear to be consistent with nursing home requirements,” said the participant. “Some families now have to travel 200 miles to see their loved ones.”

Because Medicaid is administered by the state, the tester recommended advocacy on the issue during the upcoming session.

“Once they close, the chances of them reopening are slim and so it’s important that we do everything we can to keep them open,” Tester said.

The final question of the afternoon centered on whether Tester supports ranked voting and electoral college changes, with the respondent speaking of a “broken system” with a “two-party monopoly” with “dark money” influences.

Tester said that with today’s technology it would be possible to go by popular vote, but that the electoral college system still had advantages. He said he wasn’t sure about the precedence vote but cited independent Gary Buchanan as an example of someone in the state challenging the two-party system.

Tester said he didn’t think there was a dark money ban bill he didn’t vote for.

“I think it’s a scourge. I think all that money goes into campaigns, look at that last Senate race and it was over $100 million,” Tester said. “Let’s do something functional with it.”

A woman in the audience who said she worked with Montana Women Vote and League of Women Voters Helena said she did not see the Montana Secretary of State’s office release voter registration information the same day after the matter went to court A bill signed into law last year to stop the practice was recently found unconstitutional.

The tester said that there should be a public notice on the matter and that citizens should be registered.

“That’s what this country is about,” Tester said. “Rich, poor, it doesn’t matter what color your skin is, if you’re a citizen, vote.”

That form To register to vote, see the Secretary of State’s website.

The Denver Department of Health houses a monkeypox vaccination clinic