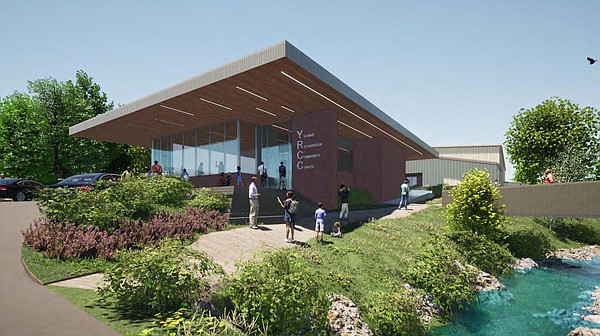 FAYETTEVILLE – The designers behind a planned expansion of the Yvonne Richardson Community Center want the space to look more inviting and build on programs that already cater to a variety of age groups.

Initial concepts were unveiled during a public input meeting held online on Wednesday. The city is hosting two more public input sessions at the center on Tuesday and Saturday.

Voters approved a park bond in 2019 that included $1 million for an expansion of the 10,000-square-foot center on Rock Street. Built in 1996, the center features an indoor basketball court, computer room and conference room, outdoor playground and garden.

The center offers an after-school program, summer and spring break camps, home-schooled physical education classes for children, and kid-friendly gardening. Adults can also participate in pickleball and an open gym with provided basketballs at certain times.

Audy Lack and Miller Boskus Lack Architects presented concepts during the meeting showing the extension to the parking lots in front of the center. A 1,500-square-foot multipurpose room with moveable partitions that could host games or classes would be the focal point, with a window facade facing Rock Street. A teaching kitchen would be located behind the multi-purpose room. A long hall in the extension would reach up to the building’s entrance, with bathrooms and a desk area.

Outside, a path would run along the creek on the east side of the site and reach north to Mountain Street. Across Rock Street to the south, Buddy Hayes Park could house a small stage, amphitheater and outdoor classroom. The park is on the southeast corner of Mill Avenue and Rock Street. Children could walk between the center and the park via a colorful crosswalk on Rock Street.

Two surveys helped the designers find a starting point. A survey of about 60 participants was conducted in person, with surveyors knocking on doors in the neighborhood. A second survey was conducted online with around 140 participants.

A playroom, an adult education room and a teaching kitchen performed well in both surveys. The concepts presented represent what is immediately achievable with the bond money, Lack said. Public donations could allow future expansion into neighboring properties in phases, he said.

“When they hired us to do this work, our brief was to find out what the bond money was appropriate for and explore what YRCC could be,” Lack said.

He said the $1 million in bond funds were intended as a seed for further expansion. City park officials have announced they are putting together tiered options in hopes of attracting philanthropic dollars. Potential donors could examine different concepts with different costs and sizes and decide whether they would like to contribute.

The city owns all but three lots in the immediate vicinity of the center and is trying to acquire as much as possible to accommodate growth.

Parking was a point of discussion at the meeting. The center has 10 parking spaces in front of the door. To compensate for the lost space, the drawings show three locations ahead of the Rock Street expansion, two of which would be accessible. There would be nine on-street parking spaces along Mill Avenue, bringing the total to 12. The center also has overflow parking on a lot over the bridge over the creek to the east.

Resident Margaret Driver said she was concerned about the parking situation but impressed with how the expanded center looked from the street. She said she hopes the center can raise more money from the public to continue expanding and suggested adding more parking lots on Washington Avenue near the Northwest playground.

Josh Lainfiesta, the center’s director, said his energies for now are focused on what the city can build with the bond money in the early stages. Having a multipurpose room and teaching kitchen, along with the existing gymnasium, would mean he could run three rotations of children’s activities at the same time. The ability to have separate groups, especially during summer programs of up to 75 children, would allow for much more efficient operations and free up staff, he said.

Bringing the expansion closer to the street, with windows through which viewers can see the activity inside, should help educate the community about what the center has to offer, Lainfiesta said.

“I like that it has a presence and that it stands out because it’s a community center that says, ‘Come in,'” he said. “The more welcoming you can be, the more curbside you can be, the better.”


Jacob Haarala (left), a student at the University of Arkansas from Appleton, Wisconsin, leads students in a game Thursday, February 17, 2022 during a science, technology, engineering and math activity led by students from the college from the University of Engineering at the Yvonne Richardson Community Center in Fayetteville. The city is in the process of raising funds for a planned expansion of the center, using $1 million from a bond issue approved in 2019. Visit nwaonline.com/220220Daily/ for today’s photo gallery. (NWA Democrat Gazette/Andy Shupe)

Students from the University of Arkansas College of Engineering lead students in a game Thursday, February 17, 2022, during a science, technology, engineering, and math activity hosted by students from the university’s College of Engineering at the Yvonne Richardson Community Center in Fayetteville. The city is in the process of raising funds for a planned expansion of the center, using $1 million from a bond issue approved in 2019. Visit nwaonline.com/220220Daily/ for today’s photo gallery. (NWA Democrat Gazette/Andy Shupe)

Fayetteville will host public input sessions on the design of the Yvonne Richardson Community Center extension over the following days. Both sessions will be held at the center at 240 E. Rock St.

Partners: Market Inside Story – Check out which players are focused on improving operational efficiencies

Shaker Village is hosting the Harvest Festival – The Advocate-Messenger this…