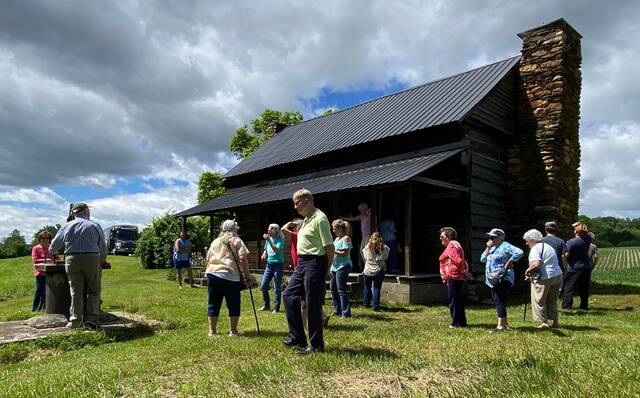 Check out the Surry 250 websites

To commemorate service members who have fallen into the service of the country, a grateful nation observes Memorial Day on the last Monday in May.

An Elkin resident and Army veteran has taken extra steps to honor the fallen after making two flights of honor to Washington, DC

Since 2005, the Flights of Honor have taken veterans on trips to view memorials erected in their honor around the nation’s capital. Now that focus has expanded.

Elkin resident and retired Master Sergeant Paul Rusk of the United States Air Force was fortunate to attend two of the flights, first as guardian and later as guest of honor. The most recent trip in April included about 90 people, including veterans, guards and medical personnel.

A rainbow water cannon salute sent the flight on its way from Greensboro’s Piedmont International Airport and greeted the veterans as they arrived at the Reagan National. Veterans, no strangers to a tight schedule, boarded four buses and stormed the memorials in a short amount of time.

The caravan of veterans drove en route to the Air Force Memorial in Arlington, Virginia to visit the Iwo Jima Memorial. Its distinctive design rises above its surroundings, making an impressive impression on those approaching from either direction.

“When the plane goes up – that’s the bomb,” he explained. The steel arches in the sky are reminiscent of the Air Force Thunderbirds’ “bomb blast” maneuver. Although only three arches are visible, the missing fourth arch symbolizes the “Missing Man” formation used on Air Force flypasts, which is particularly poignant this weekend.

He was particularly impressed by her visit to the sacred grounds of Arlington National Cemetery. They watched the United States 3rd Infantry Regiment, known as the Old Guard, at the Tomb of the Unknown Soldier and the Changing of the Guard. “I found it important that the gun on the opposite side of the soldier kept intruders away from the grave.”

For him, the Old Guard meant a lot about the ministry, Rusk said, that their high code of personal conduct and exacting standards set them apart, not just that “you can shave in the shine of their shoes.”

“The old guard boys and girls are great,” he said. The changing face of the military now means there have been five women who earned the Tomb Guard Identification Badge out of nearly 700.

“They have wives because there was a lady who did the switching.” More roles have opened up for women in traditionally restricted combat roles, the Old Guard is an active entity. But to think that the women are less capable is folly, as he warns: “We have women rangers, they’re just tough – dynamite comes in small packages, you know.”

Rusk found his late first wife’s brother on the Vietnam Memorial Wall. “I knew he had and I had found his name on the walking wall so I knew it was there, I just had to find it here. One of the volunteers on the wall did it for me as I couldn’t get down and rub.”

“Those are true heroes on the wall, and on Memorial Day we commemorate those heroes.”

Addressing the confusion many Americans have regarding Veterans versus Memorial Day, he said, “Veterans Day is for all vets, whether they’re breathing or not; and Memorial Day is for the true heroes who are in Arlington and in national and private cemeteries scattered across the country.”

To commemorate the brave fallen soldiers, the United States erected memorials on the National Mall, with World War II being the last, opening in 2004. On his most recent visit, the veterans approached the memorial from the Pacific side, while Rusk was the Warden, his group approached from the European side on a cold, rainy November day.

That day, “Brass was pouring out of the Pentagon to come over and mingle with the vets, they had all kinds of pigtails on their uniforms and scrambled eggs,” he said, using a slang term for the ornate designs of officer’s caps.

That officers from different branches came to visit the vets meant a lot to the visitors.

Flights of Honor were primarily intended for WWII veterans to take them to Washington, DC to see the memorial to their brave sacrifice and for those who did not return from that great conflict – before it was too late .

Of the three veterans under his care, he said: “As bad as the weather was, I never heard a single word of complaint from any of them. I think that was child’s play compared to what they went through in WWII. My dad was Normandy and Battle of the Bulge but we could never get him to talk about it. The WWII veterans just didn’t do it, they saw horrible (stuff).”

Rusk, who is no stranger to the horrors of conflict himself, said of his time in Southeast Asia that barbarism reigned on both sides and things happened that no one wants to repeat. “Crap happened on both sides in the jungle. We tried to wage a guerrilla war like we fought in World War II, that doesn’t work.”

He’s grateful that attitudes have changed in recent years, changing the perception and reception of Vietnam-era veterans “from baby killers to heroes.”

After a stint of 22 years and 22 days, August 1957 – August 1979, Master Sergeant Rusk called it a career when a final assignment in Berlin conflicted with the well-being of his family.

He encourages young people to consider the military and offers that the Air Force and Navy offer the best training for a non-combat role after the military. In the army, he remarked, they drill for ground combat; On a ship, day-to-day maintenance of the ship is much easier to translate directly into electrical or technical know-how than marksmanship.

He added with a chuckle, “It’s true that you can ‘join the Navy and see the world’ and get a GI bill. It’s great as long as you don’t get shot at.”