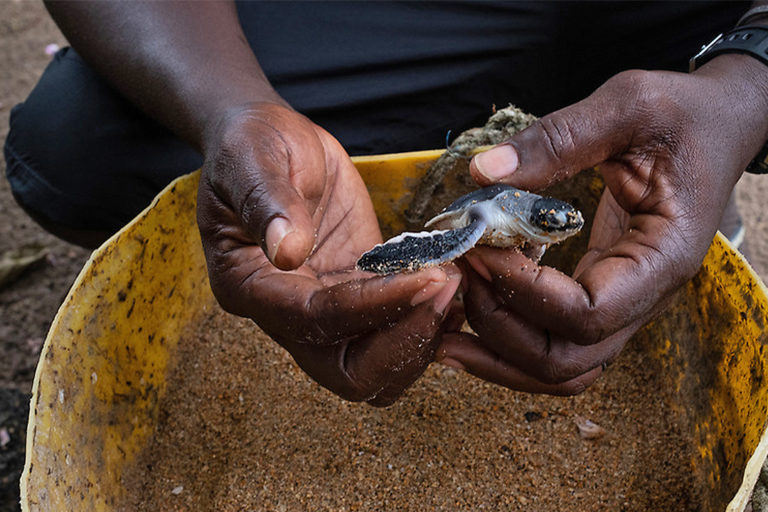 POILÃO ISLAND, Guinea-Bissau – Castro Barbosa’s eyes still glow when he remembers the first time he saw a sea turtle in 1993. He was visiting the Bijagós Archipelago of Guinea-Bissau; He was so impressed by the turtles that he has since devoted his career to protecting them.

“You were so calm, so nice. I saw that they needed protection, ”says the biologist as he walks along the beach on Poilão Island, one of the many nesting sites for sea turtles off the coast of Guinea-Bissau.

Today, Castro is 60 years old and heads sea turtle surveillance at the National Institute of Biodiversity and Protected Areas (IBAP). He oversees key nesting sites for green turtles in the João Vieira-Poilão Marine National Park, which includes Poilão and three other islands. Scientists recognize Poilão as one of the top five nesting sites in the world for green sea turtles (Chelonia mydas) and the most important in Africa. About 5% of the world’s population nest on this 43 hectare island.

The green turtles that breed in the Bijagós spend the rest of their lives in the open sea. Some stay near the João Vieira-Poilão Islands and the nearby Orango National Park, while others hike up to 1,000 kilometers (600 miles) up the West African coast to the seagrass meadows of the Banc d’Arguin off the Mauritanian coast.

But all the sea turtles that hatch here will at some point return to these beaches to breed. Although the green turtle population is declining worldwide – mainly due to hunting, over-harvesting their eggs, or accidentally catching them in fishing nets – the Poilão population appears to remain stable.

Barbosa grew up inland in the Cacheu region of Guinea-Bissau and worked on his father’s farm. He’s always been an avid scientist, and when he was trained as a biologist he thought he would specialize in mammals on land. “I knew very little about the turtles because there are few on the mainland.”

While working as a biologist for IBAP in the 1990s, Barbosa visited the islands and fell in love with their sea turtles. He participated in lengthy negotiations to provide access for conservationists and park officials to islands like Poilão, which are considered sacred by locals and taboo to outsiders. “The negotiations were very difficult for the people because it was difficult to convince the people that we want to protect the turtles and that this is also in the interest of the community.”

Preparations for a formal conservation program began here in 1998. Barbosa says patience is essential when talking to community leaders, who often asked park officials to wait hours after arriving at the meeting point before coming out to speak to them. Waiting and listening are essential to showing mutual respect among community leaders, he added.

Around the same time, locals told researchers who were doing a green turtle census that much fewer turtles visited many of the beaches of Bijagós where they were once common. Poilão, which is considered sacred and forbidden apart from traditional ceremonies, was the only place where many turtles still live. But even here the researchers found evidence of temporary camps set up by migrant fishermen and the remains of green turtles.

The park was officially established in 2000. Since then, Barbosa has overseen the development of the park’s conservation program, including monitoring, tagging and protecting the thousands of turtles that hatch in the park each year.

This contributes to a more detailed understanding of the movements of green turtles during the rest of their life cycle and allows conservationists to strengthen environmental protection – including restricting access – to these areas.

Barbosa could have retired by now, but he says he doesn’t want to do anything other than be with the sea turtles. More than one employee jokes that after years of working with the animals Barbosa – with its calm, calm demeanor and gentle smile – even resembles a green sea turtle.

On a late September night on Poilão, more than 200 adult green sea turtles wooded ashore to lay their eggs. While the mother sea turtles that climb the beach to nest are large and less prone to predation, Barbosa is drawn to protecting the thousands of hatchlings. In the early hours of the morning, when the sky is gray and the rain is threatening, he wakes up from his tent and scans the beach. It is the beginning of the breeding season; In the midst of the fresh tracks, the first eggs hatch, which were laid months before, and a few small baby turtles try to get from their sandy cradle to their home in the sea. Only a few centimeters long, they are easy prey for the birds circling above them.

Barbosa discovers a newborn baby with an injured fin. He leans forward and carefully picks it up.

“I’m still impressed every time I see a turtle,” says Barbosa with a smile. “I feel obliged to protect them.” He’s taking a break. “I don’t know how to explain it. Something is touching my heart. That makes me always protect them so that nothing hurts them before they get into the sea. “

He puts the little turtle in a bucket of sand; he hopes the fin will heal in a day or two and then be released back on the beach to make his way to the water. Then he goes back to the beach to see if any other sea turtles need him.